Why are they called "Evangelists? 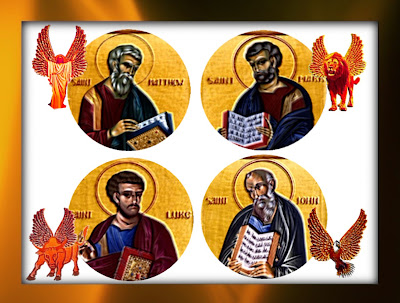 The Four Evangelists are Matthew, Mark, Luke, and John. They are called evangelists because they proclaim and preach the good news of our Lord Jesus Christ. The gospels of Matthew, Mark, and Luke are known as the Synoptic Gospels because they include many of the same stories, often in the same sequence. Convention has traditionally held the authors to have been two of the Twelve Apostles of Jesus, John and Matthew, and two "apostolic men," Mark and Luke. 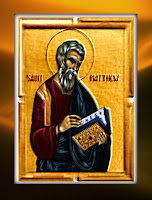 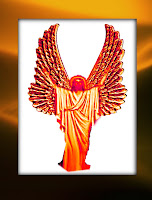 1.  Matthew – a former tax collector who was called by Jesus to be one of the Twelve Apostles. 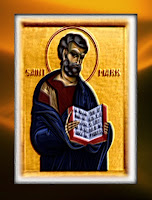 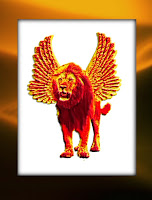 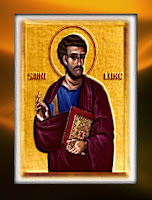 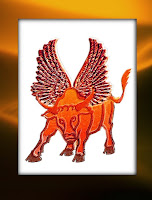 3. Luke – a doctor who wrote what is now the book of Luke to a friend Theophilus. Also believed to have written the book of Acts (or Acts of the Apostles) and a close friend of Paul of Tarsus. 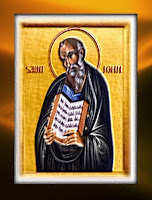 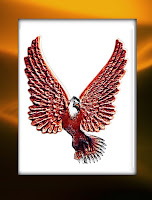 4. John – a disciple of Jesus and possibly the youngest of his Twelve Apostles.

In iconography the evangelists often appear in Evangelist portraits derived from classical tradition, and are also frequently represented by the following symbols, which originate from the four "living creatures" that draw the throne-chariot of God, the Merkabah, in the vision in the Book of Ezekiel (Chapter 1) reflected in the Book of Revelation (4.6-9ff), though neither source links the creatures to the Evangelists. They are normally, but not invariably, all shown with wings like angels. The meanings accruing to the symbols grew over centuries, and were fully expressed by Rabanus Maurus, who set out three layers of meaning for the beasts, as representing firstly the Evangelists, secondly the nature of Christ, and thirdly the virtues required of a Christian for salvation:

§  Matthew the Evangelist, the author of the first gospel account is symbolized by a winged man, or angel. Matthew's gospel starts with Jesus' genealogy from Abraham; it represents Jesus' Incarnation, and so Christ's human nature. This signifies that Christians should use their reason for salvation.

§  Mark the Evangelist, the author of the second gospel account is symbolized by a winged lion – a figure of courage and monarchy. Mark has John the Baptist preaching "like a lion roaring" at the beginning of his Gospel. It also represents Jesus' Resurrection (because lions were believed to sleep with open eyes, a comparison with Christ in the tomb), and Christ as king. This signifies that Christians should be courageous on the path of salvation.

§  Luke the Evangelist, the author of the third gospel account (and the Acts of the Apostles) is symbolized by a winged ox or bull – a figure of sacrifice, service and strength. Luke's account begins with the duties of Zacharias in the temple; it represents Jesus' sacrifice in His Passion and Crucifixion, as well as Christ being High priest (this also represents Mary's obedience). The ox signifies that Christians should be prepared to sacrifice themselves in following Christ.

§  John the Evangelist, the author of the fourth gospel account is symbolized by an eagle – a figure of the sky, and believed to be able to look straight into the sun. John starts with an eternal overview of Jesus the Logos and goes on to describe many things with a "higher" level than the other three (synoptic) gospels; it represents Jesus' Ascension, and Christ's divine nature. This represents that Christians should look on eternity without flinching as they journey towards their goal of union with God.

Each of the symbols is depicted with wings following the biblical sources first in Ezekiel 1-2, and in Revelation. The symbols are shown with, or in place of, the Evangelists in early medieval Gospel Books, and are the usual accompaniment to Christ in Majesty when portrayed during the same period, reflecting the vision in Revelations. They were presented as one of the most common motifs found on church portals and apses, as well as many other locations. When surrounding Christ, the figure of the man is usually at top left – above Christ's right hand, with the lion above Christ's left arm. Underneath the man is the ox and underneath the lion is the eagle. This both reflects the medieval idea of the order of "nobility" of nature of the beasts (man, lion, ox, eagle) and the text of Ezekiel 1.10. From the thirteenth century their use began to decline, as a new conception of Christ in Majesty, showing the wounds of the Passion, began to be used.

It has become customary to speak of "the Gospel of Matthew"  "the Gospel of John", not least because it is shorter and rolls much more smoothly off the tongue; but it is worth noting that the ancient titles do not use the genitive of possession, but the preposition "according to", signifying that each evangelist sets forth the one "Gospel of God" according to his own capacity, but not in the sense of creating his own story.

Images of tetramorphs, unions of different elements into one symbol, were originally used by the Ancient Egyptians, Assyrians, and Greeks. The image of the sphinx, found in Egypt and Babylon, depicted the body of a lion and the head of a human, while the harpies of Greek mythology showed bird-like human women. The Egyptians and Assyrians in particular were the first to attach wings to their divine images (insert citation). The tetramorphs of the Evangelists can be traced back to the winged animals of Assyrians art and sculpture. Ezekiel’s vision, from which the images of the tetramorphs are derived, are believed to have been influenced by the ancient art of Assyria.

The animals associated with the tetramorphs of the Evangelists originate from the Babylonian symbols of the four fixed signs of the zodiac: the ox, representing Taurus; the lion, representing Leo; the eagle, representing Scorpio; the man, representing Aquarius.  The four symbols also represented the four pagan elements earth, air, fire, and water. These animals were also common in Egyptian, Greek, and Assyrian mythology. The early Christians adopted this symbolism and adapted it for the four Evangelists   as the tetramorphs, which first appear in Christian art in the 5th century.

They are described later in the Apocalypse of the Revelation of John: 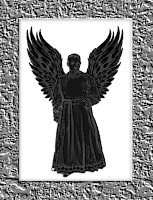 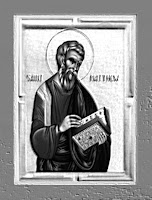 §  Matthew the Evangelist is represented as the winged man, or an angel. He is represented in human form because his gospel centres on the human nature and life of Christ. St Jerome writes -”The first face of a man signifies Matthew, who began his narrative as though about a man: ‘The book of the generation of Jesus Chris the son of David, the son of Abraham’”. 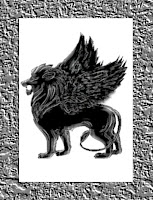 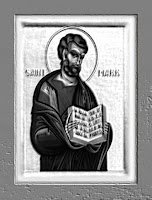 §  Mark the Evangelist is represented as a lion. He is represented in the form of a lion because he proclaims the royal dignity of Christ, the lion being the king of beasts. ”The second [face signifies] Mark in whom the voice of a lion roaring in the wilderness is heard: 'A voice of one shouting in the desert: Prepare the way of the Lord, make his paths straight.” 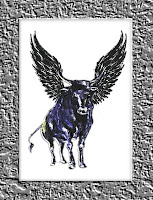 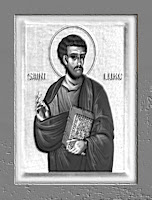 §  Luke the Evangelist is represented as an ox, or a calf. He is represented in the form of an ox as his gospel dwells on the atonement and the sacrifice of Christ, the ox being an ancient symbol of sacrifice. ”The third [is the face] of the calf which prefigures that the evangelist Like began with Zachariah the priest.” 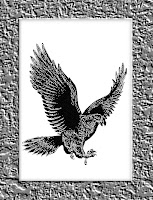 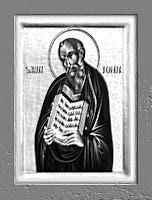 The tetramorphs as they appear in their animal forms are predominantly shown as winged figures. The wings, an ancient symbol of divinity, represent the divinity of the Evangelists, the divine nature of Christ, and the virtues required for Christian salvation In regards to the depiction of St Mark in particular, the use of wings distinguish him from images of St Jerome, who is also associated with the image of a lion.

The perfect human body of Christ was originally represented as a winged man, and was later adapted for St Matthew in order to symbolize Christ’s humanity. In the context of the tetramorphs, the winged man indicates Christ’s humanity and reason, as well as Matthew’s account of the Incarnation of Christ.  The lion of St Mark represents courage, resurrection, and royalty, coinciding with the theme of Christ as king in Mark’s gospel. It is also interpreted as the Lion of Judah as a reference to Christ’s royal lineage.  The ox, or bull, is an ancient Christian symbol of redemption and life through sacrifice,  signifying Luke’s records of Christ as a priest and his ultimate sacrifice for the future of humanity. The eagle represents the sky, heavens, and the human spirit, paralleling the divine nature of Christ.

In images where the creatures surround Christ, the winged man and the eagle are often depicted at Christ’s sides, with the lion and the ox positioned lower by his feet, with the man on Christ's right, taking precedence over the eagle, and the lion to the left of the ox. This position reflects the medieval great chain of being.

The four Gospels originally circulated anonymously; none of them bear the name of their authors. The names that are presently attached to our canonical Gospels are the product of second-century speculation, and they are intended to stress the apostolic credentials of the Gospels. Most of us assume that the Gospels are the direct products of either Jesus' apostles (John and Matthew) or their loyal lieutenants (Mark and Luke); however, this is not the overwhelming view of the majority of biblical scholars.

Is it really important to be more certain who the real authors of the Gospels are?  Isn’t it enough that our faith tells us that these were written by the apostles of Jesus Christ and are therefore divinely inspired?

The more I read those articles of different Scholars and Critics of the Catholic or Christian faith the more it gets complex and confusing.

I believe that man will be saved by his own faith…That is Faith in One and Only true God – The Son Of God the Father, who became Man – To deliver mankind from sins. Amen!