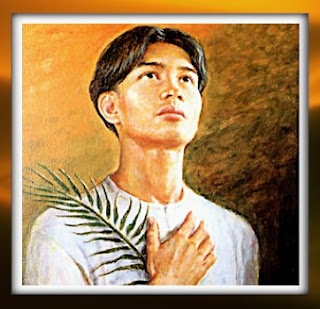 Pedro Calungsod (1654 – 2 April 1672) was a young Roman Catholic Filipino migrant sacristan and catechist, who along with Blessed Diego Luis de San Vitores, suffered religious persecution and martyrdom in Guam for their missionary work in 1672. Through Calungsod and Servitors' missionary efforts, many native  Chamorros converted to Roman Catholicism. Calungsod was beatified on 5 March 2000 by Blessed Pope John Paul II. On 18 February 2012, Pope Benedict XVI officially announced that Calungsod will be canonized on 21 October 2012.

Few details of his early life prior to missionary work and death are known. It is probable that he received basic education at a Jesuit boarding school, mastering the Catechism and learning to communicate in Spanish. He likely honed his skills in drawing, painting, singing, acting, and carpentry as these were necessary in missionary work. Calungsod would have been expected to have some aptitude in serving in the Tridentine Mass (now known as the extraordinary form of the Roman Rite).

The only source of information regarding him is found in the documents on the martyrdom of P. Diego Luis San Vitores, SJ.  In these documents we know for sure that Calungsod was Padre Diego's faithful assistant in the mission,  a "catechist".
He was praised because "he merited the happiness of accompanying the Venerable Padre in his death" ("merecio la dicha de acompanar al Venerable Padre en su muerte").

Calungsod, then around 14, was among the exemplary young catechists chosen to accompany the Jesuits in their mission to the Ladrones Islands (Islas de los Ladrones or “Isles of Thieves”). In 1668, Calungsod travelled with Spanish Jesuit missionaries to these islands, renamed the Marianas Islands (Las Islas de Mariana) the year before in honor of both the Blessed Virgin Mary and of the Queen Regent of Spain, Maria Ana of Austria, who funded their voyage. Calungsod and San Vitores went to Guam to  catechize the native Chamorros.

Missionary life was difficult as provisions did not arrive regularly, the jungles and terrain was difficult to traverse, and the islands were frequently devastated by typhoons. Despite all these, the mission persevered, and was able to convert a significant number of locals.

A Chinese merchant named Choco began spreading rumors that the baptismal water used by missionaries was poisonous. As some sickly Chamorro infants who were baptized eventually died, many believed the story and held the missionaries responsible. Choco was readily supported by the macanjas (medicine men) and the urritaos (young males) who despised the missionaries.

In their search for a runaway companion named Esteban, Calungsod and San Vitores came to the village of Tumon, Guam on 2 April 1672. There they learnt that the wife of the village chief   Mata'pang gave birth to a daughter, and they immediately went to baptize the child. Influenced by the calumnies of Choco, the chief strongly opposed to give Mata'pang some time to calm down, the missionaries gathered the children and some adults of the village at the nearby shore and started chanting with them the tenets of the Catholic religion. They invited Mata'pang to join them, but he shouted back that he was angry with God and was fed up with Christian teachings.

Determined to kill the missionaries, Mata'pang went away and tried to enlist another villager, named Hirao, who was not a Christian. Hirao initially refused, mindful of the missionaries' kindness towards the natives, but when Mata'pang branded him a coward, he became piqued and capitulated. Meanwhile, during that brief absence of Mata'pang from his hut, San Vitores and Calungsod baptized the baby girl, with the consent of her Christian mother.
When Mata'pang learnt of his daughter's baptism, he became even more furious. He violently hurled spears first at Pedro, who was able to dodge the spears. Witnesses claim that Calungsod could have escaped the attack, but did not want to leave San Vitores alone. Those who knew Calungsod personally meanwhile believed that he could have defeated the aggressors with weapons; San Vitores however banned his companions to carry arms. Calungsod was hit in the chest by a spear and he fell to the ground, then Hirao immediately charged towards him and finished him off with machete blow to the head. San Vitores absolved Calungsod before he too was killed..

Mata'pang took San Vitores' crucifix and pounded it with a stone whilst blaspheming God. Both assassins then denuded the corpses of Calungsod and San Vitroes, tied large stones to their feet, brought them out to sea on their proas and threw them into the water.

In the Roman Catholic Church, Calungsod's martyrdom is called In Odium Fidei or In Hatred of the Faith, referring to the religious persecution endured by the person in evangelization

A year after the martyrdom of San Vitores and Calungsod, a process for beatification was initiated but only for San Vitores. Political and religious turmoil, however, delayed and halted the process. When Hagåtña was preparing for its 20th anniversary as a diocese in 1981, the 1673 beatification cause of Padre Diego Luís de San Vitores was rediscovered in old manuscripts and revived until San Vitores was finally beatified on 6 October 1985. This gave recognition to Calungsod, paving the way for his own beatification.

In 1994, then Cebu Archbishop Ricardo Cardinal Vidal asked permission from the Vatican to initiate the beatification and canonization cause of Pedro Calungsod. In March 1997, the Sacred Congregation for the Causes of Saints approved the acta of the diocesan beatification process. That same year, Cardinal Vidal appointed Fr Ildebrando Leyson as vice-postulator for the cause, tasked with compiling a Positio Super Martyrio (position regarding the martyrdom) to be scrutinized by the Congregation. The position, which relied heavily on the documentation of San Vitores' beatification, was completed in 1999.

Blessed John Paul II, wanting to include young Asian laypersons in his first beatification for the Jubilee Year 2000, paid particular attention to the cause of Calungsod. In January 2000, he approved the decree super martyrio (concerning the martyrdom) of Calungsod, setting his beatification for 5 March 2000 at Saint Peter's Square in Rome.

“...From his childhood, Pedro Calungsod declared himself unwaveringly for Christ and responded generously to his call. Young people today can draw encouragement and strength from the example of Pedro, whose love of Jesus inspired him to devote his teenage years to teaching the faith as a lay catechist. Leaving family and friends behind, Pedro willingly accepted the challenge put to him by Fr. Diego de San Vitores to join him on the Mission to the Chamorros. In a spirit of faith, marked by strong Eucharistic and Marian devotion, Pedro undertook the demanding work asked of him and bravely faced the many obstacles and difficulties he met. In the face of imminent danger, Pedro would not forsake Fr. Diego, but as a "good soldier of Christ" preferred to die at the missionary's side.” ”

On 19 December 2011, the Holy See officially approved the miracle qualifying Calungsod for sainthood by the Roman Catholic Church. The recognized miracle dates from 2002, when a Leyte woman who was pronounced clinically dead by accredited physicians two hours after a heart attack was revived when a doctor prayed for Calungsod's intercession.

Cardinal Angelo Amato presided over the declaration ceremony on behalf of the Congregation for the Causes of Saints. He later revealed that Pope Benedict XVI approved and signed the official promulgation decrees recognizing the miracles as authentic and worthy of belief. The College of Cardinals were then sent a dossier on the new saints, and they were asked to indicate their approval. On 18 February 2012, after the Consistory for the Creation of Cardinals, Cardinal Amato formally petitioned Pope Benedict XVI to announce the canonization of the new saints.

The Pope set the date for the canonization on 21 October 2012 (World Mission Sunday), 340 years after Calungsod's death.

After Saint Lorenzo Ruiz, Calungsod will be the second Filipino declared a saint by the Roman Catholic Church. The Roman Martyrology celebrates Calungsod's feast along with Blessed Diego Luis de San Vitores every 2 April.

President Aquino with Archbishop Emeritus of Cebu Ricardo J.Vidal and Archbishop of Cebu Jose S. Palma during a meeting last Feb 2012 regarding the Canonization of Pedro Calungsod . 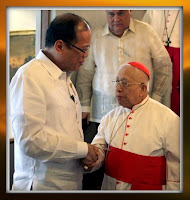 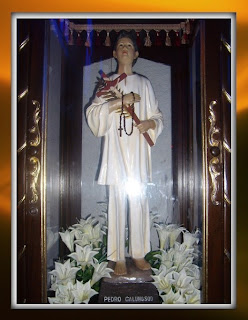 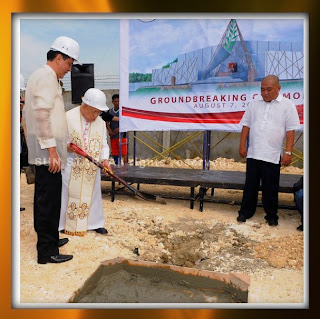